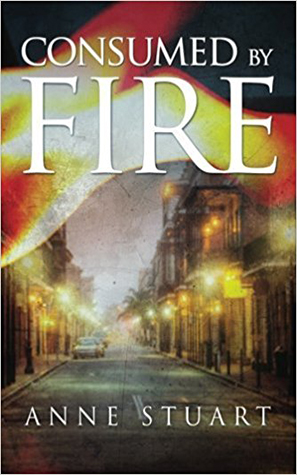 Consumed by Fire (Fire, #1) by Anne Stuart
Published by Montlake Romance on May 26th 2015
Buy on Amazon

Evangeline Morrissey is smart, pretty, and dedicated to research. She doesn’t have an exciting life, but, she is well traveled and uses her travels to explore the world. While on such an excursion, she becomes a witness to a murder that she has no idea has taken place. She was simply in the wrong place at the wrong time. A handsome stranger asks her to dinner, she is hesitant and for good reason. Who would’ve thought that dinner would turn into a life changing event?

James Bishop, a paid assassin, who kills without blinking an eye. His instincts tell him that Evangeline is not a threat, his partner feels that she is a loose end that should be dealt with. There’s something unique about her. It’s not as if she is gorgeous, but, there is an innocent beauty that makes him curious. He decides to take things into his own hands and protect her against his partner. He knows she didn’t witness the murder and can’t possibly alert anyone. He has to pull a hat trick to protect her, but, turning her life inside out was not part of the plan… neither was falling for her!

The Good:
This was fun. It was one of those reads that makes you want to know “what happens next”! Being in danger and not knowing is always a good twist. Sexual attraction to someone you should despise is a plus. I loved “the puppy” …. you’ll see if you read the book! LOL!
[divider style=’left’]

The Bad:
I hated the partner. She was hell bent on killing Evangeline. She was unfeeling and unemotional. In other words… a straight bitch!!
[divider style=’left’]

The Ugly:
Ok, I hated that in order to protect her, he had to trick her. I don’t like a woman being played with no matter what. Tell her the truth and let her decide what to do.
[divider style=’left’]

Worth the Read?
She was fine getting over him. He just had to find her and ruin everything. She realizes she has to see this through and get her life back. Someone wants her dead and will stop at nothing to make sure she doesn’t see another day. James has vowed to protect her and he refuses to let her go until she is safe. I was taken on a great adventure of hot sex, mystery, and suspense. There were parts that left my heart racing and I was scared for Evangeline. Gripping, tantalizing, and overall brilliant. This was a great read. It had its moments where I felt it was too wordy, but, it was enjoyable.  Solid 4 Stars!