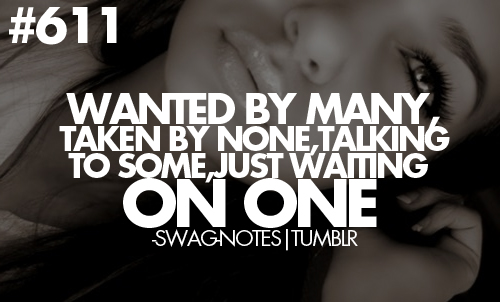 This girl made some great points in describing how a single female thinks and feels. She is correct in saying to take it slow. They were fine on their own and a man would be an addition to what they already have going on. They have learned to function without anyone else’s input. They have learned to survive.

If I had to say one thing to counter this, it would be that sometimes women can be so caught up in their survival that they miss the signs of a good man. You can’t treat every encounter with a man like your previous relationships. All men are not the same and you can’t make a man pay for the mistakes of the knuckle head that broke your heart. It is important to see dating for what it is… just dating. I do believe that a single woman knows exactly what she doesn’t want after a breakup, however, if she dates a guy (without looking for a relationship) she can learn some things about herself as well. Don’t be so strong that a man can’t figure out how to take care of you. Find a happy medium where you show parts of your vulnerable side to give him a chance to nurture that.

Here is an exert:

“The truth is most girls have at least one or two or even more people who would date her if she wanted to. But choosing to be single comes with self-respect of not wanting to settle. Because if settling in the past has taught her anything, it’s that sometimes being in a relationship will make you feel more alone than being single. And honestly, there is nothing worse than that.”

There comes a time in our lives where we say “if it happens, great and if it doesn’t, I’m ok”. That is a good thing, because it means your happiness isn’t defined by someone else. Always have an open mind, be honest and clear in your expectations. Don’t take everything seriously and keep it light. First impressions are a telltale sign of things to come, but, it’s not they don’t tell the whole story. Don’t let your ability to be a strong independent woman be so loud that he can’t hear the other parts of you.

Related articles across the web

3 Simple Love Rules for Anyone In A Relationship!
Things Women Do That Are Sexy And Attracts Mr Right
According to Latest Research Most Wives Don't Think Their Husbands Are Sexy

This site uses Akismet to reduce spam. Learn how your comment data is processed.