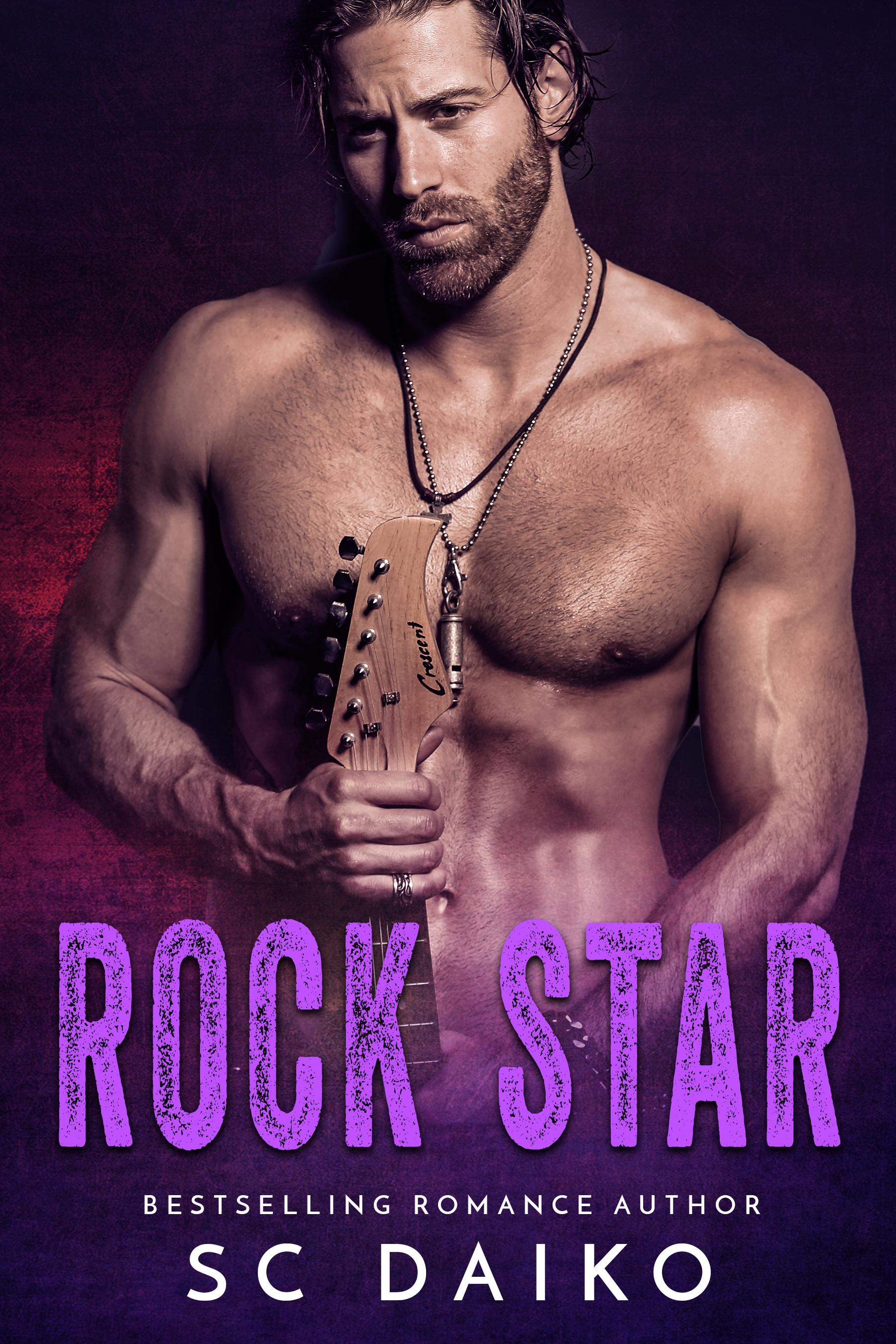 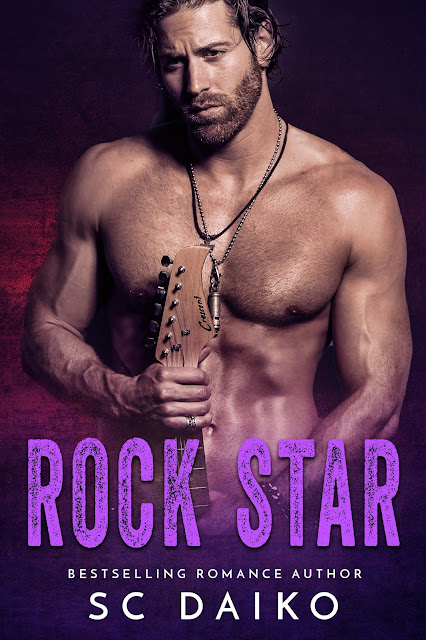 Axel Wainwright. British rock god. Bad boy.
He sets the crowds on fire with his voice and his words.
Singing backup for him is my dream job.
My big chance to get recognised and become a star.
Music is my life and now it consumes me.
HE consumes me.
But I have my career to think about; I’ve worked years for this.
I need to keep my distance from Axel, or he’ll burn me to ashes.
Except, guess what? The best-laid plans have a habit of going wrong.
My name is Phoenix Johnson, and, like Icarus, I’ve flown too close to the sun.

The guys were waiting backstage behind a velvet curtain when I joined them. They all told me I looked beautiful and I said the same back to them. I wasn’t lying… they were freaking rock gods, dressed in ripped jeans, skin-tight tees, chains and amulets around their necks, each one of them over six feet in height and drop-dead gorgeous. In my heels, my head only came up to their chins as they pulled me into a group hug—it was what they always did before a concert, and it felt oddly reassuring.
“Awesome tat, Firebird,” Axel whispered into my ear, sending a shiver to my core.
“Can’t wait to see yours,” I countered, my voice breathy.
His gaze lingered on me, stripping me naked.
Oh, God.
I guessed it was this sexy dress… he’d treated me one hundred percent professionally while I’d been practicing with him at his place, keeping his distance and not repeating the kiss he’d given me that first time.
The time when I’d felt his hard-on as I’d brushed past him.
Now wasn’t the moment to think about such things, though. The music being played on the sound system beforehand had fallen silent, and I could sense the anticipation of the audience as we walked onto the darkened stage.
We took up our positions, the stage lights hitting us and an eruption of whistles and screams broke out. Foxy clacked his sticks three times, then brought them down on the skins. Rhys launched into the riff, his guitar wailing. Zach came in on the keyboards. Axel added the bass and his voice cut through the air like a shard of glass. ‘Ghost in the Heart’—all crashes and slashing cords lit by flashing, almost blinding white light—was the perfect overture, and I felt honored to be contributing my voice harmonies toward it.
The crowd went wild, I could tell from the whoops, but, as the song neared its end, the band surprised them by kicking the tempo up a notch. Foxy drummed faster, faster, faster, and Axel shouted, “jump!” The spinning stage lights flashed to purple, and the audience was suddenly, undeniably, at a ChiMera rave, having the time of their lives.
Song followed electrifying song. I couldn’t take my eyes off Axel. He was mesmerizing, seeming to touch the life of every person in the crowd. He spread his arms out wide then brought them in, pointing toward the wildest fans, who then lost their shit. After crouching and singing to the front row, he would leap up in an explosion of energy that sent the entire nightclub into a frenzy. He fed off the response, devouring it like he’d been starved, and throwing it back at them, his infectious performance almost tangible, like something they could reach out and grasp in their hands.
With bated breath, I waited for the ‘off the shirt’ moment. When it came, toward the end of the set, my legs felt as if they would slip from under me. Dammit he was ripped. Freaking beautiful. He threw his tee into the audience and the spotlight followed it to the lucky recipient, a dark-haired lady who let out a squeal of pleasure before burying her nose in it. Axel held every woman in the audience in his hands at that point. I wouldn’t have been surprised if they’d thrown their panties at him. I stared at the stunning bass guitar tat on his shoulder and I couldn’t help smiling. He was such a bad ass. 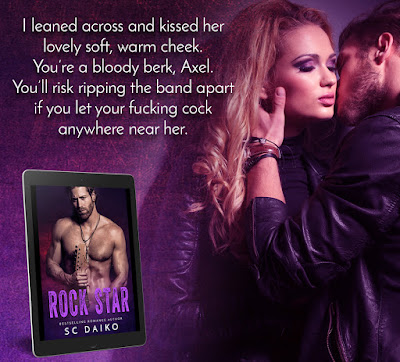 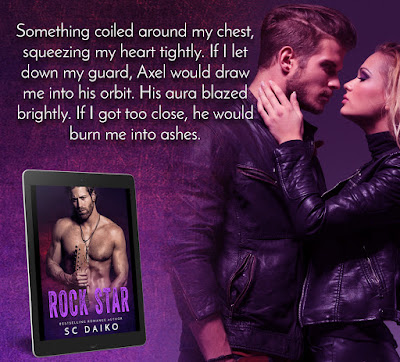 Everybody Hurts R.E.M.
Creep Radiohead
Hard to Explain The Strokes
Run for Cover The Killers
The Drugs Don’t Work The Verve
Oh My God Kaiser Chiefs
Times Like These Foo Fighters
All I Want is You U2
What a Wonderful World/Fix You Coldplay

SC Daiko, aka Siobhan, is a British author of fast-paced bestselling contemporary romance and romantic suspense. When she isn’t writing or looking after guests, Siobhan loves to swim in the sea, travel around Europe, sample different food and enjoy local wine. She has worked in the City of London and taught languages in a Welsh high school before moving to Italy, where she now lives with her husband and two cats. Nothing makes Siobhan happier than connecting with readers and fellow authors. 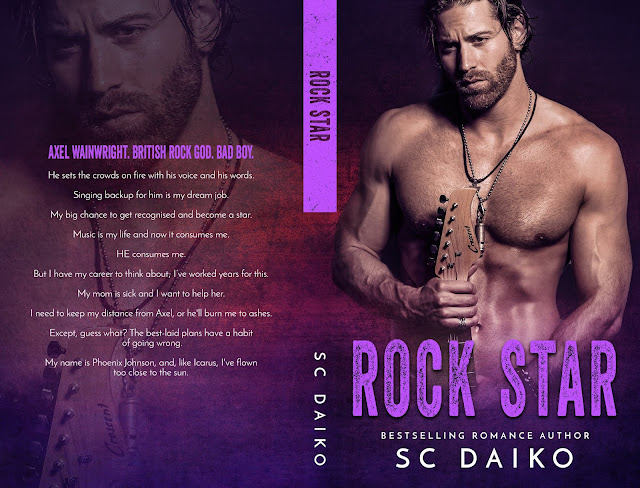