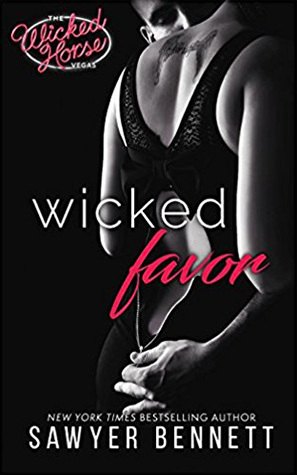 Trista Barnes was content in her life. She had a good job, a house, and a nice nest egg for hard times. She did not expect her sister to abandon her daughter and she didn’t expect her niece to need life saving surgery.  Becoming an instant surrogate Mom, borrowing money from a loan shark, she needed money fast. She called in a favor, via her brother, to Jerico Jameson. Her brother knew that Jerico would help her get the money she needed to pay off her loan. Broken, bruised, and not knowing where to turn, she works off her loan at the Wicked Horse and unexpected, wicked things happen…

Jerico Jameson, owner of The Wicked Horse, is all man and makes no excuses for his sexual appetite. He knows what he likes and how he likes it. His tastes for all things wicked have earned him a reputation. When he sees Trista, the sister of his enemy, he tries to remain stoic and unfeeling. There’s something about her that makes him weak. He is hell bent on revenge and vows to use Trista for his quest, but, at what cost?

The Good:
In typical Sawyer Bennett fashion, this book is chock full of fantasies and wicked play. Gone are any inhibitions and the sexual freedom rides high in this read.
[divider style=’left’]

The Bad:
I was not a fan of Jerico using Trista to exact revenge on her brother. She had nothing to do with what her brother did and what he had planned is sick and twisted.
[divider style=’left’]

The Ugly:
Trista’s brother’s role in this twisted tale made me angry. The way he treated her was unforgiving.
[divider style=’left’]

Worth the Read?
I enjoyed listening to this story. If I had to sum it up, I would say that it was sexually freeing. The Author intertwined the story with Trista’s desires so well. The Wicked Horse makes you come alive and allows you to discover and explore. In the end, when this story comes to a head, can Trista forgive Jerico for his deception? Can she look passed what he was willing to do just to get revenge on her brother? Happiness is so close that they can taste it, but, Jerico’s need to execute his plan takes precedent over his happily ever after…. besides, he doesn’t do relationships…or does he? Solid 5 Stars!!