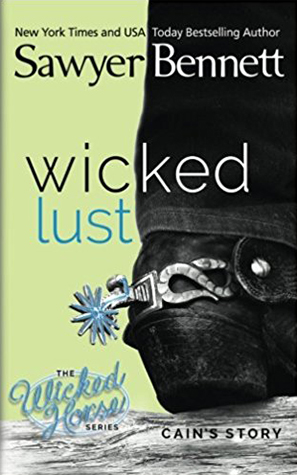 Cain Murphy is a bad boy. Ruthless in his actions and has no time for love or relationships. After a tour in the Marines, he returns home and he took a job as head of security for The Wicked Horse…an exclusive sex club. He is charged with protecting the members and the secret existence of the club.

Sloane Preston a reporter who loves uncovering secrets, goes undercover and she is on a mission to reveal the truth behind the Wicked Horse and expose it for all to see. What she didn’t count on was being so attracted and drawn to Cain that it drives her crazy. He takes control of her body and soul…getting her to do things she never imagined…. enjoying pleasure beyond her limits.

While playing his games, she comes to terms with her own kinky and wicked ways. They are caught up in a vortex of sexual hunger and desire that neither one can resist. He fulfills her ultimate fantasy and the more she gives in to him, the more she sees that she can’t betray his trust and trust of those in his world.

The Good:
There is lots and lots of hot sex!
[divider style=’left’]

The Bad:
I was mad at Cain in some parts…. don’t want to give anything away.
[divider style=’left’]

The Ugly:
I didn’t want it to end! I wanted a little more drama in the HEA, but, it was good.
[divider style=’left’]

Worth the Read?
What can I say? This story was muey caliente’! Lots of adventure and dramatic moments that kept me on edge. I loved how Sloane struggled with her duties as a reporter vs her heart. She was very torn between doing her job and keeping Cain out of her heart.

The things he awakens her make it difficult, however, she awakens feelings in him that he had no idea existed. The question is will Cain forgive her when he finds out who she really is? Will Sloane go through her plans of destroying the very lives that she has come to love? Will pleasure outweigh duty? So many questions…intense, passionate, dirty, raw… Solid 4 Stars!